G-Neo Colloids: Development of novel guanidinoglycoside based nanoparticles and nanogels for an efficient delivery of unmodified therapeutics 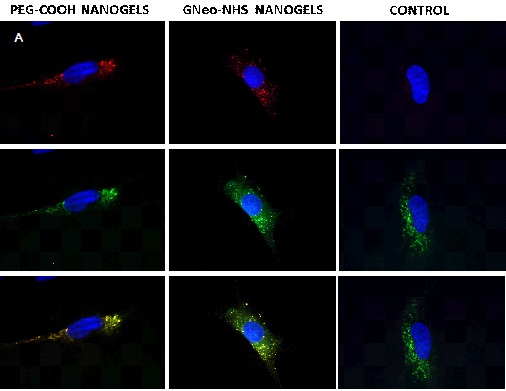 Main purpose of the project has been the synthesis of a new nanogel based on a PEG-PEI copolymer decorated with a modified guanidino-glycoside compound. This nanogel should then offer the possibility to embody an antitumoral drug which did not need to undergo any previous chemical modification.
The great strength of this nanogel is its ability to interact with the heparan sulfate, one of the most represented glycosaminoglycan in our body, present on the membrane of almost every cells. Thanks to its interaction with heparansulphate, the newly modified nanogel can be easily internalized by the cell, and the drug potentially released. At the same time, the selected copolymer is totally biocompatible and biodegradable, without showing any cytotoxic effect on cells at all.
This project is clearly in the extremely actual field which deals with nanomedicine. Traditionally, antitumoral drugs are administered systemically, even though this type of administration has several drawbacks. In particular, the main issue concerns the need that the concentration of the drug resides for the longest time possible in the therapeutic window, i.e. in a concentration interval where it can be effective. To fulfill this need, the concentration of the drug often overcomes toxicity levels, with severe consequences on the whole organism. The actually spreading trend, on the other hand, aims at the possibility to irreversibly damage tumoral cells, minimally altering the physiology of the healthy ones. The antitumoral drug, through a controlled release, is forced to be selectively internalized only by specific cells, the tumoral ones in this case.
Although the synthesis of the nanogel could seem the core part of the project, it was rather articulated into three main parts: the synthesis, a computational part which dealt with molecular dynamics simulations of Neomycin and Guanidino-Neomycin before, of a more complex structure, trying to include the nanogel as well then. Guanidino-Neomycin represents the specific molecule which is able to interact with the proteoglycans found on cell membranes. There was, as a consequence, a significant interest in the comprehension of its structure in an environment similar to the human one. Neomycin is the chemical molecule easily found in commerce, which underwent guanidination to reach the final design of the interacting molecule, its analysis was considered of potential interest too.
While the computational and chemical parts could be performed in the meanwhile, the one related to the physical characterization was forced to follow the synthesis of the compound. It dealt with the use of spectroscopic techniques, Raman spectroscopy in particular to achieve a deep analysis of the neo-synthesized compounds.